Thursday was a great day for Andy Black, as he hit two home runs to carry the Panthers to a 14-2 victory over Mississinewa in seven innings. The Panthers didn’t let up, as they kept racking up runs until the end. The Panthers scored six runs in the last one innings to finish off the blowout 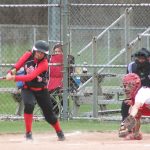 Megan Cly had two hits and Nicole Lawvere struck out nine while scattering six hits in leading Eastbrook to a 3-0 CIC victory over Mississinewa.  The win snapped a six game winning streak for the Indians and moved the Panthers to 2-0 in the CIC.  Key defensive plays by Jordan Burman and Katey Jo Bradford 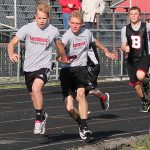 The Jr. High track teams split their meets with Oak Hill to open their season.  The Jr. high girls lost both 7th grade and 8th grade meets.  The boys’ teams were victorious in both of their meets. The 7th grade girls got victories from Kylie Standfest in the 100 hurdles, and Audrey Altum in the

The Varsity baseball team will be adding a game to their schedule. This game will be on Wednesday, April 30th @ Huntington North @ 5:00pm. This is an AWAY game.

The Varsity baseball game vs. Jay County has been re-scheduled for Wednesday, May 21st @ 5:30pm. This will be a HOME game.

The Panther track teams used their best night of the year to run an outstanding meet last evening.  The boys’ team defeated Southwood and Northfield to stay undefeated on the season.  The girls put a great effort – in spite of missing three of their highest point scorers – to take second to Southwood. The

The Panthers lost 9-1 to Northfield on Thursday, despite a total of four hits. Andy Black had an impressive outing against Northfield’s lineup. Andy held Northfield hitless over two innings, allowed no earned runs, walked two and struck out three. Remington Monce recorded the win for Northfield. He allowed one run over seven innings. Remington struck