On August 27, the Panthers took on the Eastern Comets on their home turf, fully expecting it to be a preview of a possible sectional matchup. That matchup did indeed come about as both teams took care of their sectional opponents on Wednesday in blowout fashion, the Comets beating Oak Hill 5-1 and the Panthers downing Blackford 8-1. Many Eastbrook parents, friends, students, and former soccer players came out to support the boys in their quest for their first sectional title. 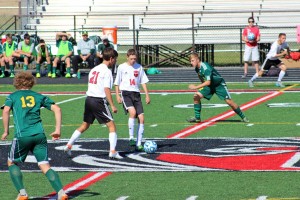 The first matchup in August between these teams turned into a blowout early, as the Comets surged to a 3-0 lead only 10 minutes into the game. The Panthers held tough for about 60 minutes after that, until a flurry of goals against the backups made the final score 6-0 Eastern. The Panthers, however, took that 60 minutes of tough play to heart, knowing they could play with Eastern and give them a tough match. And they did just that on Saturday.

Given their prior success, Eastern probably came in thinking they had this game won as soon as they stepped on the turf, but the Panthers would have none of it. With the crowd fully behind them, the Panthers matched Eastern’s team speed and challenged them on every front. Coach Hallis spent the days leading up to the game instilling in his players that they could win this game. And each player played with that belief during the game. The defense continued to thwart Eastern attacks, and the offense was not without its share of opportunities to score. 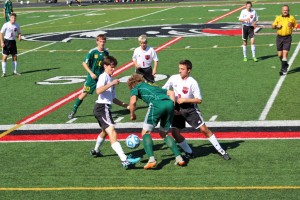 It took a perfect offensive play for Eastern to break through. With 28 minutes left in the first half, Eastern’s senior twin brother duo of Dalton and Dillon Ryan connected for a goal, as Dalton sent a perfect through ball that Dillon anticipated perfectly in the middle of the field, beating Panther goalie Daniel Brainer. It wasn’t so much a defensive breakdown for the Panthers, as it was a great offensive play for Eastern.

The Panthers held tough for the rest of the half, creating a few more scoring opportunities, but failing to find the back of the net as the game went into halftime with Eastern leading 1-0. 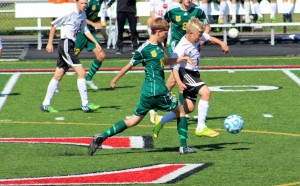 The second half was a much the same as the first, with the defense holding fast while the offense continued to try to break through for a goal. The back of the net continued to elude the Panthers, however, as Eastern’s defense held tough.

With about 8 minutes left in the game, coach Hallis moved defender Stephen Lakanen forward on offense, leaving three defenders back. The move created a little more possession, but time ran out on the Panthers’ season with the score still stuck at 1-0 as Eastern survived a gritty and determined Panther team to win its second sectional title in a row. 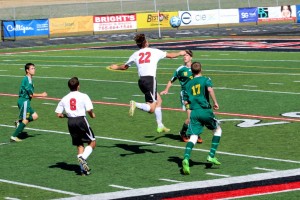 While the sectional championship continues to elude the Panthers, this year’s squad has nothing to hang their heads about. They played a fantastic game against a very good opponent, showing the fans what next year’s squad could be capable of. Having to replace 9 graduated seniors from the previous year, the 2015 squad spent much of the year trying to find the best combination of players. Toward the end of this season, those players started to gel, and going into 2016 there will be fewer holes to fill.

The Panthers end the season with a 9-4-2 record. Congratulations boys, you have a lot to be proud of! Here’s to a successful season and let’s go get that sectional championship in 2016! 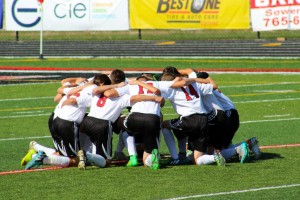