The Eastbrook Panthers lost a battle of the bats on Monday, falling short in a 16-8 ballgame against Maconaquah. 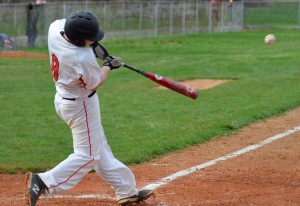 Luke Elliott got a hit in each of his three at bats. He homered in the first inning, singled in the fifth inning, and doubled in the sixth inning.

Blake May recorded the win for Maconaquah. He allowed four runs over 4 1/3 innings. He struck out seven, walked one and surrendered six hits.

Andrew Rumple took the loss for the Eastbrook Panthers. He allowed 10 runs in 1 2/3 innings, walked one and struck out two.

Maconaquah went up for good in the first, scoring four runs on an error, a two-run home run by Klein, and a groundout by Josh Fewell.

Maconaquah built upon its lead with six runs in the second. A wild pitch scoredTyler Reed to start the scoring in the inning. That was followed up by Feller’s double, bringing home Vince Taylor and Kade Dennis.

“Powered by Narrative Science and GameChanger Media. Copyright 2015. All rights reserved.” Any reuse or republication of this story must include the preceding attribution.