The Eastbrook girls basketball ended seven years of frustration against the Marion Giants by rallying from an eight point deficit in the fourth quarter to stun the Giants 42-39, picking up their first win against Marion since 2006. 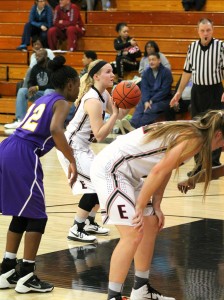 After bolting out to a 14-3 lead at the end of the first quarter, the Lady Panthers struggled against the speed and pressure of the Giants in the second quarter and trailed 20-16.  The Panthers hung close into the fourth quarter, keeping the game within reach.  With the game on the line, they calmly stepped to the free throw line and knocked down shot after shot.  Two free throws by Kaley Kitts put the Panthers ahead for good with 29 seconds remaining in the game.  Brooke Saylor led the Panthers with 20 points and 8 rebounds.

Eastbrook also won the junior varsity game by surviving a furious Marion rally and holding on for a 35-33 victory.

Check out the photo galleries for pictures from both contests.  And for more photos of Eastbrook athletics, click on flickr.com/photos/eastbrookathletics.