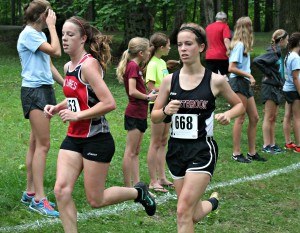 The Eastbrook boys and girls cross country teams competed Saturday morning at the Western Invitational.  This meet typically gives the Panthers the opportunity to compete against traditional state powers like Carmel, Westfield and West Lafayette.  The boys team, led by Michael Neideck’s 39th place finish, landed a spot in the top 10 with their 10th place finish.  The girls team finished 13th with Hannah Seward leading the way in 43rd place.

This challenging course doesn’t see many fast times run on it, but both the boys and girls teams showed excellent depth.  Only 93 seconds separated the Panthers’ first and fifth runners, while the girls saw less than three minutes between their top five runners.

Both teams will compete again next Saturday in the Asics Marion Invitational  at Indiana Wesleyan University.  Look for photos of the Western Invite in the photo gallery.  Be sure to check out flikr.com/photos/eastbrookathletics for more pictures of all Eastbrook sports.