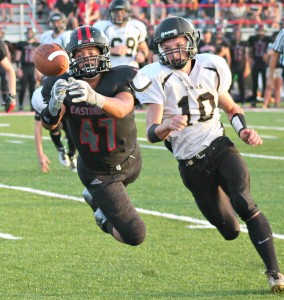 A young Eastbrook Panther football team struggled Friday night in their home opener, falling to the Rochester Zebras by a score of 40-14.  Two early touchdowns by Rochester set the tone as the Panthers struggled to recover from their early deficit.

The Panther offense moved the ball effectively by grinding out 256 total yards.  Turnovers proved costly, however, as three fumbles erased scoring opportunities for Eastbrook.  Rochester was able to capitalize on all three turnovers, turning each into a score for the visiting Zebras.

Luke Elliott got the Panthers on the board midway through the fourth quarter with a 3-yard touchdown run.  After the Panther defense forced a punt on the next series, Tyler Bennett provided the highlight of the night by returning the punt 65 yards for the Panthers’ second score.  Ethan Cramer tacked on extra points following each of Eastbrook’s touchdowns.

Elliott led the Panthers with 147 yards rushing.  Bennett completed four of six passes on the night, including three to Justen Reece.

Eastbrook goes on the road next week to take on the Western Panthers.

Check out the photo gallery for pictures from the game.  To see even more photos of Eastbrook athletics, visit flikr.com/photos/eastbrookathletics.